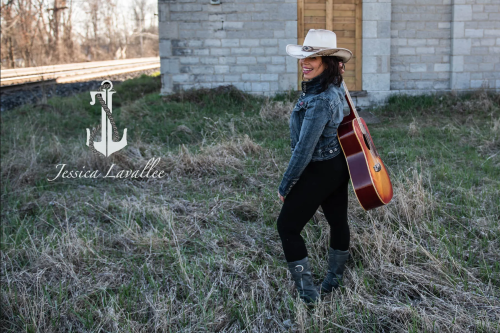 Jessica’s love and natural ear for music began when she was just two years old while listening to her father – also a musician – play the guitar, fiddle, accordion, and harmonica. Jessica made her debut at six years old with her father’s band, playing in a local festival in Labrador close to home. Influenced by many music styles like; classic country, Irish, Blues and Southern Rock she blends them with her unique, powerful voice and sings stories that stay true to her roots.

A graduate of the Music Industry and Performance program at the College of the North Atlantic in Stephenville, NL, Jessica was twice featured on Canadian Idol and made top ten on Country Music Television’s Karaoke Star. For the past few years Jessica has played in local clubs and festivals around the 1000 Islands, busy writing and performing music whenever she has the opportunity.

In 2021 Jessica embarked on a mission to record a second EP so she called up her producer Kent Wells in Nashville. Due to travel restrictions in place, they arranged a virtual recording for this session. Jessica sent the acoustic versions for Kent to produce. Later, Jessica recorded her vocals at Randy Orr’s studio in Brockville, Ontario before sending it all back down to Kent in Nashville for final production. The second single from this project, “When I Fly” arrives Friday May 6, 2022.

Find her on the main stage on Blockhouse Island.

Check out the full entertainment and activity schedule.